Serva64 is one of those little utilities that you might first look at and wonder just why it exists. For those of you who have never heard of it, Serva64 is a very lightweight and simple multi server tool. It can be used as an FTP, DHCP, TFTP, HTTP or syslog server and it comes in two flavours, the free version that needs to be run on a desktop via logged in user or the pay for version that can be run as a service.
I’ve only ever used the free version simply because it’s a very good tool for troubleshooting and testing as well as for upgrading switches or other equipment in the home lab that may need a TFTP server or HTTP Server to be up and running for a few minutes as opposed to several hours. In short, it’s a perfect rapid deployment tool to fix or help fix a specific issue.
Serva64 doesn’t need to be installed, it just needs to be downloaded, extracted from the zipfile and launched twice. Why twice? The first time you launch it you tell serva 64 what you want to run and how it’ll be configured which it then saves to an .ini file, the second time you launch it serva64 will read that file and fire up the services. 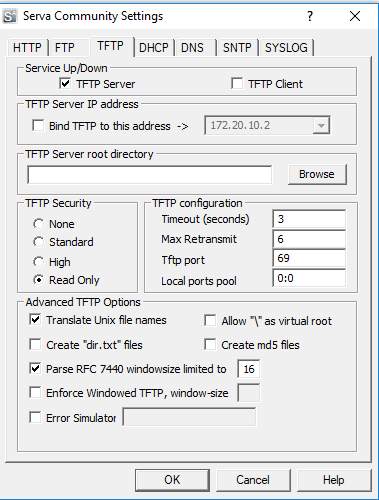 All in all, it’s a great little tool for quick and dirty tasks but not one I’d be happy running in production for things like HTTP. Maybe for TFTP yes, DHCP in a major crisis where a DHCP server is down, yes but beyond that I’d only ever use it as a troubleshooting tool.
The community version of Serva64 can be downloaded from http://www.vercot.com/~serva/download/Serva_Community_64_v3.0.0.zip
Note that the community edition is for personal use only, for anything commercial you’ll need the licenced edition.

Technical support is one of those things that you hope to not need too often but when you do need it, you need something that you can count on, is there for you

Ramblings of a Sysadmin
—
Handy apps - Serva64
Share this