Windows 2016, TP5 just came out and, after largely ignoring the previews, this one is looking rather good so I thought it was time to give it a bit of attention starting with Hyper-V.

Windows 2016 has some impressive improvements to Hyper-V, in fact, some of them look like they may well give VMWare a bit of a run in so it'll be interesting to see how things stack up once 2016 has had time to be deployed to a few datacenters.

My first test for any new Windows based OS is to test out the WIM file deployment through WDS. With Windows 2016 TP5, this worked perfectly and it even allowed me to use the same unattend file I created for Windows 2012 R2

My first test in HyperV was to migrate a machine from Windows 2012 R2 Hyper-V to 2016 TP5, as this is going to be something a lot of IT departments will look at first, after all, if you can't get your VM's into 2016 then the take up will almost certainly be slower.

I was a bit surprised when the move didn't work, it generated an error saying I never had permissions which was a bit strange. 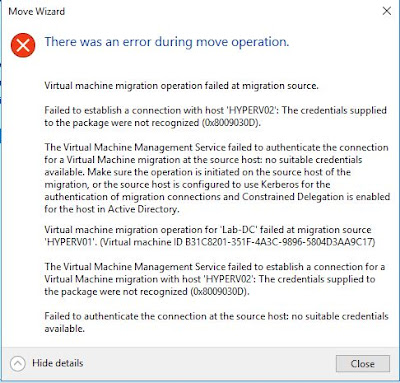 Out of randomness, I added the 2016 TP5 server to the MMC on the 2012 R2 server and tried the move again and it worked. It seems that moving from 2012 R2 to 2016 is fine as long as the move is run from the 2012 R2 MMC which strikes me as a little strange and certainly something worth watching out for when the full version is released.
A move from one 2016 server to another went without error.

Aside from that little bit of strangeness, the move from 2012 R2 to 2016 worked pretty flawlessly.

Upgrading a VM's configuration from 2012 R2 (Version 5) to 2016 (version 7.1) is straight forward and takes no time at all but like VMWare, it has to be done whilst the machine is powered off.

Along with the version 7.1 VM you also get something new, production checkpoints. These are actually snapshots that are Microsoft approved to be used in a production environment. Microsoft don't say how long a VM can be used with checkpoints. Personally, I'd still avoid them being used for more than a few days as that will cause slowdowns for large VM's. 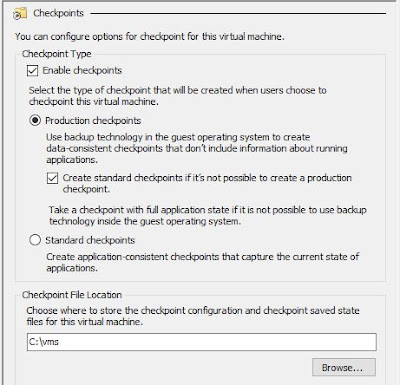 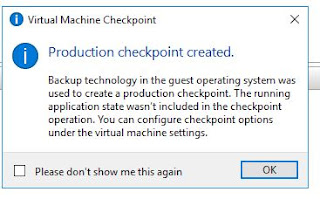 One other improvement that has been long overdue is the ability to add a vnic to a live VM. This is something that has been in VMWare for years and yet was strangely absent from Hyper-V until now.
After using Hyper-V in 2016 for a few hours, I'm impressed with the changes, many of which are long overdue to bring Hyper-V onto a level playing field with VMWare. The MMC for it though is still many times more clunky that that offered by VCentre.

If you've not come across Chocolatey then it's certainly worth a look. Those of you who have used Linux will be familiar with yum and/or apt-get, well, this is the Windows version

I've played around with IIS Crypto a fair bit, for those who don't know it, it's a freeware application that can make changes to the registry to restrict the protocols that are used

Ramblings of a Sysadmin
—
Exploring Windows 2016 TP5 - HyperV
Share this